The store will not work correctly in the case when cookies are disabled.
Menu
Account
Settings
Currency
KES - Kenyan Shilling

Skip to the end of the images gallery 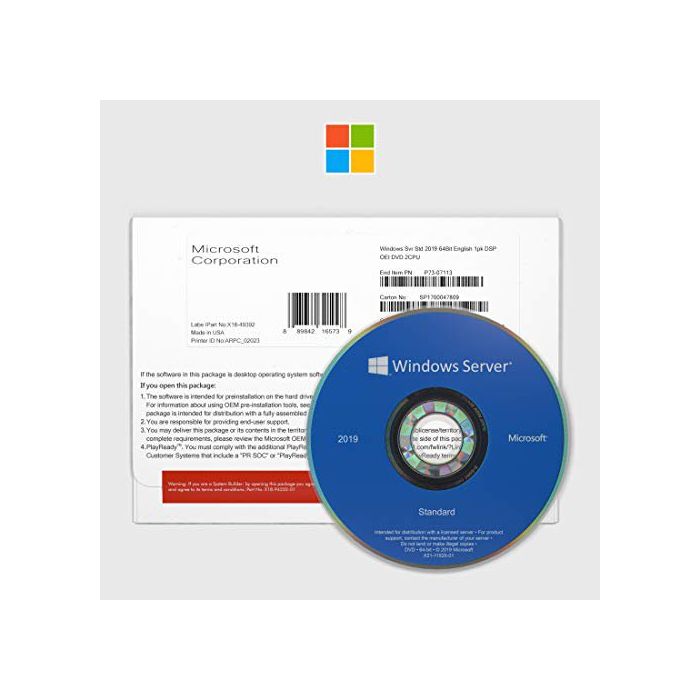 Skip to the beginning of the images gallery

Windows Svr Std 2019 64Bit English 1pk DSP OEI DVD 16 Core is here.Get the cloud-ready operating system today to apply another levels of security and innovation  to the applications and infrastructure, that power your business. Support the workloads you run today, and make it easier to move to the cloud, when you're read

System Insights
System Insights is a new feature available in Windows Server 2019 that brings local predictive analytics capabilities natively to Windows Server. These predictive capabilities, each backed by a machine-learning model, locally analyze Windows Server system data, such as performance counters and events, providing insight into the functioning of your servers and helping you reduce the operational expenses associated with reactively managing issues in your Windows. Server deployments.

This optional feature on demand is available on a separate ISO and can be added to Windows Server Core installations and images only, using DISM.

Attack Surface Reduction(ASR)  is set of controls that enterprises can enable to prevent malware from getting on the machine by blocking suspicious malicious files (for example, Office files), scripts, lateral movement, ransomware behavior, and email-based threats.
Network protection  protects the endpoint against web-based threats by blocking any outbound process on the device to untrusted hosts/IP addresses through Windows Defender SmartScreen.
Controlled folder access protects sensitive data from ransomware by blocking untrusted processes from accessing your protected folders.
Exploit protection is a set of mitigations for vulnerability exploits (replacing EMET)that can be easily configured to protect your system and applications.
Windows Defender Application Control (also known as Code Integrity (CI) policy) was released in Windows Server 2016. Customer feedback has suggested that it is a great concept, but hard to deploy. To address this, we have built default CI policies, which allows all Windows in-box files and Microsoft applications, such as SQL Server, and block known executables that can bypass CI.

Security with Software Defined Networking (SDN)
Security with SDN delivers many features to increase customer confidence in running workloads, either on-premises, or as a service provider in the cloud.

These security enhancements are integrated into the comprehensive SDN platform introduced in Windows Server 2016.

For a complete list of what's new in SDN see, What's New in SDN for Windows Server 2019 .

You can now run shielded virtual machines on machines with intermittent connectivity to the Host Guardian Service by leveraging the new fallback HGS and offline mode features. Fallback HGS allows you to configure a second set of URLs for Hyper-V to try if it can't reach your primary HGS server.

Offline mode allows you to continue to start up your shielded VMs, even if HGS can't be reached, as long as the VM has started successfully once, and the host's security configuration has not changed.
Troubleshooting improvements

We've also made it easier to troubleshoot your shielded virtual machines  by enabling support for VMConnect Enhanced Session Mode and PowerShell Direct. These tools are particularly useful if you've lost network connectivity to your VM and need to update its configuration to restore access.

These features do not need to be configured, and they become available automatically when a shielded VM is placed on a Hyper-V host running Windows Server version 1803 or later.
Linux support

If you run mixed-OS environments, Windows Server 2019 now supports running Ubuntu, Red Hat Enterprise Linux, and SUSE Linux Enterprise Server inside shielded virtual machines.
HTTP/2 for a faster and safer Web
Improved coalescing of connections to deliver an uninterrupted and properly encrypted browsing experience.
Upgraded HTTP/2's server-side cipher suite negotiation for automatic mitigation of connection failures and ease of deployment.
Changed our default TCP congestion provider to Cubic to give you more throughput!
Storage
Here are some of the changes we've made to storage in Windows Server 2019. For details, see What's new in Storage .

Building Support for Kubernetes
Windows Server 2019 continues the improvements to compute, networking and storage from the semi-annual channel releases needed to support Kubernetes on Windows. More details are available in upcoming Kubernetes releases.

Containerizing Windows-based applications just got easier: The app compatibility for the existing windowsservercore image has been increased. For applications with additional API dependencies, there is now a third base image: windows .
Reduced size and higher performance

We've made it easier than ever to see which containers are running on your computer and manage individual containers with a new extension for Windows Admin Center.
Encrypted Networks
- Virtual network encryption allows encryption of virtual network traffic between virtual machines that communicate with each other within subnets marked as Encryption Enabled . It also utilizes Datagram Transport Layer Security (DTLS) on the virtual subnet to encrypt packets. DTLS protects against eavesdropping, tampering, and forgery by anyone with access to the physical network.

Network performance improvements for virtual workloads
maximizes the network throughput to virtual machines without requiring you to constantly tune or over-provision your host. This lowers the operations and maintenance cost while increasing the available density of your hosts. These new features are:

Receive Segment Coalescing in the vSwitch
Dynamic Virtual Machine Multi-Queue (d.VMMQ)
Low Extra Delay Background Transport
Low Extra Delay Background Transport (LEDBAT) is a latency optimized, network congestion control provider designed to automatically yield bandwidth to users and applications, while consuming the entire bandwidth available when the network is not in use.
This technology is intended for use in deploying large, critical updates across an IT environment without impacting customer facing services and associated bandwidth.

Persistent Memory support for Hyper-V VMs
To leverage the high throughput and low latency of persistent memory (aka storage class memory) in virtual machines, it can now be projected directly into VMs. This can help to drastically reduce database transaction latency or reduce recovery times for low latency in-memory databases on failure.

Unless otherwise specified, these minimum system requirements apply to all installation options (Server Core, Server with Desktop Experience, and Nano Server) and both Standard and Datacenter editions.

The highly diverse scope of potential deployments makes it unrealistic to state "recommended" system requirements that would be generally applicable. Consult documentation for each of the server roles you intend to deploy for more details about the resource needs of particular server roles. For the best results, conduct test deployments to determine appropriate system requirements for your particular deployment scenarios.

1.4GHz 64-bit processor
Compatible with x64 instruction set
Supports NX and DEP
Supports CMPXCHG16b, LAHF/SAHF, and PrefetchW
Supports Second Level Address Translation (EPT or NPT)
Coreinfo is a tool you can use to confirm which of these capabilities your CPU has.

RAM
The following are the estimated RAM requirements for this product:

If you create a virtual machine with the minimum supported hardware parameters (1 processor core and 512 MB RAM) and then attempt to install this release on the virtual machine, Setup will fail.

To avoid this, do one of the following:

Allocate more than 800 MB RAM to the virtual machine you intend to install this release on. Once Setup has completed, you can change the allocation to as little as 512 MB RAM, depending on the actual server configuration.
Interrupt the boot process of this release on the virtual machine with SHIFT+F10. In the command prompt that opens, use Diskpart.exe to create and format an installation partition. Run Wpeutil createpagefile /path=C:\pf.sys (assuming the installation partition you created was C:). Close the command prompt and proceed with Setup.

Storage controller and disk space requirements
Computers that run Windows Server 2019 must include a storage adapter that is compliant with the PCI Express architecture specification. Persistent storage devices on servers classified as hard disk drives must not be PATA. Windows Server 2019 does not allow ATA/PATA/IDE/EIDE for boot, page, or data drives.

The following are the estimated minimum disk space requirements for the system partition.

The system partition will need extra space for any of the following circumstances:

If you install the system over a network.
Computers with more than 16 GB of RAM will require more disk space for paging, hibernation, and dump files.

An Ethernet adapter capable of at least gigabit throughput
Compliant with the PCI Express architecture specification.
A network adapter that supports network debugging (KDNet) is useful, but not a minimum requirement.

A network adapter that supports the Pre-boot Execution Environment (PXE) is useful, but not a minimum requirement.